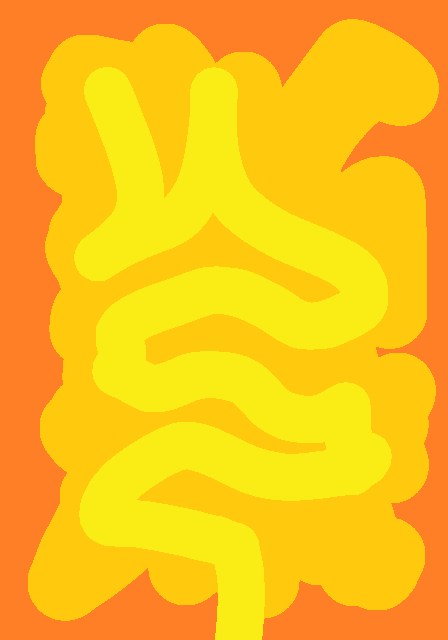 Some art made playing the game Passpartout.

Passpartout: The Starving Artist (Steam: Passpartout) is a simulation game about being an artist. You paint using simple tools and put your paintings up for sale to be evaluated by different classes of picky customers. As you progress, you specialize in some kind of art or other. It’s a fun game, with some unknown evaluation criteria. One of the undersung aspects of gaming is as an outlet for player creativity, and I like that about this game. Out of 570 images I created, here are ten I liked the best. (Most were pretty crude, even compared to these, and there were way too many “expressionist” paintings…)

A look (devolving into ranting about copyright) at TPB AFK, a documentary on The Pirate Bay.

Basically the website is a clearing house for BitTorrent file sharing offerings. BitTorrent is a protocol (a set of conventions for computer network traffic) that allows you to share files in a distributed manner. This means multiple people can facilitate both the sending and receiving of the files.

A crucial point about the way the website works, it never actually sends or receives any of the files. It only announces other people who say they will send them.

But there comes a problem: what if people share files they don’t own the temporary rights to. And the result has been a lot of legal fuss and political fuss aimed at stopping this from happening.

That is what this film is about: the ad hoc owners of some of the files, along with Swedish authorities, prosecuted the people running The Pirate Bay.

The main question is, of course, not the one being asked by authorities or the custodians of the content. The main question is what shape of custodial rights works in the digital era? Their question, instead, is how do we maintain the status quo?

And so they try what they always tried before: sue them, prosecute them, “disrupt, misdirect, discredit, or otherwise neutralize” them. They sue over the most minimal infringements, including cases of Fair Use (the doctrine that some unlicensed uses of temporarily held works are not infringement, due to the nature of the use).

This is a doomed effort. They freely admit this, for the temporary custodians of the world’s content have asked the governments to act by passing new laws they have drafted and treaties they have negotiated in secret.

In some ways it is akin to the foster parent that loves the child so much that they don’t want the child to return to the natural parents when they are located. But in this case the foster parent also makes quite a lot of money off of the newest children, and a few of the older children, but neglects the rest.

But The Pirate Bay has a unique culture. They take offense at the status quo, and ridicule it at every turn. Their original claim to notoriety (other than the name of the site) was the posting and mocking of barking letters (letters sent by lawyers that carry no legal authority, but are nonetheless meant to intimidate the recipient into action).

The film drives this attitude home repeatedly. At one point it recounts the creation of a website where people were encouraged to rate the dumbness of American soldiers for how they died in the United States and coalition invasion of Iraq.

This is the culture of the Darwin Awards and dead baby jokes. But it is a revolt or reaction against the poisonous reverence that drives humans to ignore vast hypocrisies in their cultures and politics.

That’s your keyword: reaction. The Pirate Bureau is created as a counterpoint to the government/industry Anti-Pirate Bureau. The widespread adoption of BitTorrent is at least partly a reaction to the establishment dismantling centralized file sharing protocols.

But the biggest reactions are yet to arrive. The prosecutor’s language you will see in the trial as filmed in the documentary tells all you need to know. The prosecutor asks a question, what if users of the website share copyrighted materials? Ah, but excepting the occasional work that has returned to the public domain, all works are copyrighted.

Not just all intentional works. All works. The way your plate looks after you finish your breakfast is your unique creation, and you hold a temporary, but legally enforceable right over that depiction. The arrangement of the refuse in your wastebasket are your copyright. If I throw something away there, assuming I have permission, I am now your collaborator in a unique work.

But instead of being clear, saying something like, “copyrighted work shared without permission and where the custodian reserves their rights,” we are left with this convenient notion that copyright serves the big man, never the little man.

Anyway, go check the film out. It is under a Creative Commons license (the main film is CC:BY-NC-ND, meaning you can share it but not profit or edit it; there is another version that allows editing). And yes, you can download it from The Pirate Bay.

This tended off on a tangent, because copyright is a mess. And the people arguing that it is immoral to download the latest pop album have yet to waste their breath to challenge the greater immoralities of copyright.

My understanding there is simply this: if you value the work, try to pay for it in some way. If it’s nothing but a way for you to pass the time, consider finding something better than the creation of people who would like to see you in jail and in debt for life for not paying for their waste of time. In the latter case you will be better off anyway.

A short post on the value of information to our way of life.

If you look at the history of any major problem, the solution has involved the freeing of information in some manner. For diseases it involved understanding the transmission, immunity patterns, and eventually understanding the actual bacteria and viruses. World War II was largely an information war, with mathematical feats used to free information and hide it, to gain the upper hand in the conflict.

Is hiding information okay? It depends on the information being hidden. For example, for a military campaign in the aforementioned war, a certain amount of hiding was necessary. But that sort of information has a short half-life (the time until the sensitivity of the information is halved).

But, all things being equal, the more information that is known about a problem, the easier it is to solve the problem. That means systems that try to tie up what is really public information, like scientific and artistic works that have been published (from the same general origin as public) are failures from their inception. They are confusing control with revenue.

It makes sense for people that create works have a decent quality of life. But that’s different than what’s being done. What’s being done is you have people afraid to share their works because they don’t want someone else stealing their works. You have people who are doing everything in their power to lock down a perpetual copyright law enforced under penalty of death. You have people fighting for the right to share art and scientific knowledge with each other. And you have people missing crucial pieces of information in their endeavors to become better scientists, artists, citizens, because access is blocked.

That’s all bad enough, but the same tools being sold to the Copyright Armada are also turned against people fighting oppressive regimes the world over. You have the same information blocks leading to huge recessions because the traders are naive enough to think an information gap is their best way to make money.

Information is the critical element that makes us more than mere animals, just as when a crow picks up a piece of bent wire and uses it as a tool it is something greater than a crow with a piece of wire. Information is what allows us to do something other than forage and hunt all our days, without shelter.

It is critical that we improve our flows of information. It is information alone that can prevent our worst acts and enable our best acts.